Looking forward to your next event! 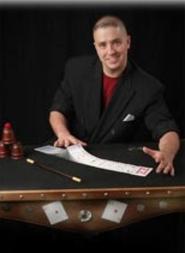 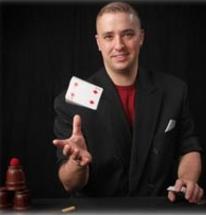 Mark Miller has been doing Las Vegas styled card magic and sleight of hand since 1992. His quick wit and silver tongue will have you hooked and his amazing slight of hand will keep you mesmerized for hours. He is truly a performer extraordinaire in the art of magic and illusion. You won't want to miss seeing him in action. Read on to learn more about Mark the Magician.
Mark taught himself by reading Magic and Illusion books while in the United States Navy. He did a lot of reading and practicing during all of those long months at sea.
During his stint in the Navy, he was able to perform in several countries and cities including Spain, Italy, France, Venice, Rome, Japan, Canada and extensively through out the United States. Among Marks specialties are Cards, Coins, Money, Fire, Dice, Mind Reading, Productions, Silks, and More.
Mark performs as well as teaches. He is co-owner, with his wife Debbie, of Perfect Occasion Costumes & Magic.

Debra/Spitunia has been clowning since 1980.  She has won several awards for skits, face and body art, and costume design.  She is an accomplished Artist, Seamstress, Costume Designer, Illustrator, and Performer.  She has performed in Canada and several states across the U.S.  Among Debs specialties are Face and Body Art (painting), Games, Stories, Puppets, Party Planning, Wedding Planning, Make Up Application, and Theatre.
Spitunia and Company
Debbie/Spitunia is the director of a traveling puppet and performance troop.  With a full puppet stage that we set up for each performance,that includes scenery, our shows consist of a half hour to 45 minute presentation. Each show is differant.  Some include special effects, water, dancers, sing-a-longs, magicians, music, costumed characters and more.  There are several show choices.  A Mothers Day Tribute, Show your Patriotic Side, The Pirate, The Story of the Candycane, Rupunzel, and George Washington. Each show is family friendly, and great for all ages!
Debra/Spitunia has performed and or taught at Pittsburgh Performing Arts in Ministry in Pennsylvania (also on the Board), Family Festival of the Arts in Ministry in Pennsylvania, Mid Atlantic Clown Association, Mountain State Clown Workshop in Charleston, West Virginia, Wesley Woods Christian Performing Arts Camp in Pennsylvania, P.O.N.Y Convention, Pennsylvania, Ohio, Ontario, and New York, Munchkinland Market Days, Chesterton, Indiana (performed with surviving cast members of the Wizard of Oz movie, and other celebrities), Scrappers Minor League Baseball Team, The Captains Minor League Baseball Team, The Cleveland Crunch, Great Lakes Medieval Faire, Many Companys and Corporations, Cleveland Tall Ships Revue, Sharon Pennsylvania Small Ships Revue, Lake Farm Park, Kirtland, Ohio for President Bush Campaign stop, American Cancer Society Relay for Life, several cities, Middlefield Community Days, Tobys Clown Alley in Lake Placid, Florida, South Carolinas LaLaPalooza, and much more!
One of the fun things Spitunia has in mind to tickle your funny bone is stories.  She likes her audiences to see her reading from a book.  Using puppets, props, and lots of silly expressions Spitunia interacts and makes the story come to life.  Even if you have heard the story before, Spitunia puts a whole new flair to it!  Silly stories and silly surprises are in store for you when Spitunia reads to you.
Professional Make Up Artist

Looking to be something other than yourself? Make Up Artist, Debra, can turn you into the extroidinary. From simple FX applications like a wart, or hair ,to totally changing who you are. For example, Frankenstein, a warewolf, an old character, a clown etc. We have a full line of noses, ears, warts, chins, scary effects, and more. Be sure to visit us for make up demonstrations and get on the schedule for make up classes.
Illustrator

Illustrator Debra Warren Miller has been illustrating books for several years.  She has illustrated for several Geneology authors, among them Violet Young Warren, author of "Huntsburgs Old Crowd." Debra has illustrated the majority of Violets books.  Debra also designed greeting cards and has illustrated several childrens books, including "The Monster in the Basement" and "The Caterpillers New Clothes." Some of Debra's art work is on file with the Gregath Publishing Company.